The Gustav Preller Prize for Literature and Literary Criticism has been awarded to Bill Henderson (University of Johannesburg).

Prof. Bill Henderson is a prolific intellectual whose career has spanned the past six decades; he works both on the literature of ancient Greece and Rome and on the promotion of Classics in South Africa. His passion is shown not only by his role as an inspirational lecturer and supervisor, but also by his various management positions within academia; Prof. Henderson is a board member of professional associations and has made a significant contribution to the discipline as a leading board member of prominent academic journals.

The prize is sponsored by NB Publishers. 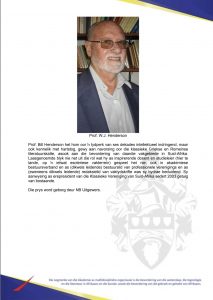